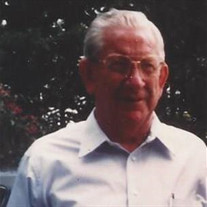 Mr. Windell Oliver Hutcheson , age 86, of Douglas passed away Tuesday afternoon, May 30, 2017, at Coffee Regional Medical Center, following an extended illness. He was born July 24, 1930 to the late Homer Hutcheson and the late Blonnie Taylor Hutcheson. Other than his parents, he was preceded in death by his Wife, Eleanor Delores Handegaard Hutcheson and 2 Brothers, Jeff M. Hutcheson and Cecil Hutcheson. He loved and enjoyed being with his family. Mr. Hutcheson, a native of Coffee County, was an electrician and owner of Smyrna Marine Company. Mr. Hutcheson was a member of Lone Hill United Methodist Church. Survivors include: 1 Brother: Billy Hutcheson of Covington, GA 2 Sisters: Nadine (George) Radcliff of Blairsville, GA and Jo Ann (Gene) Smith of Everett, GA Several Nieces, Nephews, Cousins and a host of friends The funeral service was held Friday, June 2, 2017 at 2:00 P. M. at Lone Hill United Methodist Church with Rev. Mary Ann Braswell and Brother Chris Hutcheson officiating. The interment followed in Douglas City Cemetery. Active Pallbearers were: Allen Hutcheson, David Radcliff, Chris Hutcheson, Christopher Hutcheson, Jeff Hutcheson and Brian Peszynski. Special Musical Selections, “God Shall Wipe Away All Tears” and “The Prettiest Flowers”, were presented by the Soloist, Paul Hutcheson, with Lois Mills, at the Piano and “Amazing Grace” was presented as a Congregational Hymn with Pattie Griffis, at the Keyboard, and Maggie Crosby, at the Piano. “Pre-Lude” and “Post-Lude” soft hymns were rendered by Pattie Griffis, at the Keyboard, and Maggie Crosby, at the Piano. Ricketson Funeral Home was in charge of the arrangements.

The family of Windell Oliver Hutcheson created this Life Tributes page to make it easy to share your memories.