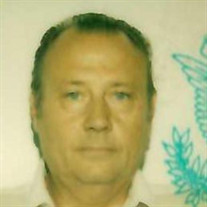 Mr. Wilbur Max Jackson, age 87 of Douglas, GA, passed away Wednesday, January 19, 2022 at Coffee Regional Medical Center following an extended illness. Mr. Jackson was born April 23, 1934 to the late Everett Jackson and the late Mable Booher Kaderly Jackson. Other than his parents, he was also preceded in death by 2 Brothers: James Jackson and Donald Brown and one sister, Jessie Brown. Mr. Jackson, a native of Gary, Indiana, was a self-employed electrician. He was a Veteran of the United States Marines, where he served during the Korean Conflict. Survivors include: His Wife: Gertrudis Guerra of Douglas, GA 6 Children: Susan Rimmer of Beaufort, NC Randy Jackson of Beaufort, NC Joy Bailey of Aurora, NC Wilbur Jackson, Jr. of Hollywood, FL Debra Martinez of FL Francisco Jackson Guerra of Douglas, GA 1 Brother: Larry Jackson of Portland, Indiana 8 Grandchildren and 4 Great Grandchildren Several Nieces, Nephews, Cousins and Many Friends The memorial service will be held on Friday morning January 21, 2022 at 11:00 AM at Ricketson Funeral Home Chapel with Rev. Ruben Speight officiating and Dr. Bayron Beltran presenting an eulogy. Memorialization will be by cremation. Due to COVID-19, the family has asked all attendees to please follow the rules and guidelines for social distancing and wear your mask for safety precautions at the service. Ricketson Funeral Home is in charge of the arrangements.

The family of Wilbur Max Jackson created this Life Tributes page to make it easy to share your memories.

Send flowers to the Jackson family.