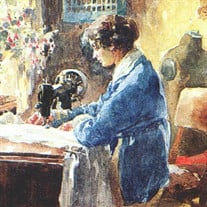 Mrs. Sallie Hutcheson Swinehart, age 82, of Alma, passed away Monday afternoon, August 15, 2016 at the Mayo Health Clinic in Waycross, following an extended illness. Mrs. Swinehart was born May 5, 1934 to the late Sammie Hutcheson and the late... View Obituary & Service Information

The family of Sallie Hutcheson Swinehart created this Life Tributes page to make it easy to share your memories.

Send flowers to the Swinehart family.