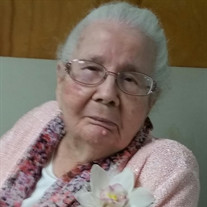 Mrs. Pauline Anderson Veal Gieger, age 85, of Douglas passed away Tuesday morning, December 22, 2015, at the Coffee Regional Medical Center, following an extended illness. She was born December 26, 1929 to the late Fisher Anderson and the late Anna Todd Anderson. She was also preceded in death by her late husband’s, Clyde Veal of 49 years, and Ledford Gieger of 7 years, and 1 Grandchild, Savannah Highsmith. Mrs. Gieger, a native of Coffee County, was a homemaker. She had been a resident of Shady Acres for the past 6 years. Mrs. Gieger was a member of the Chatterton Holiness Baptist Church. Survivors include: 2 Daughters: Caroline (Bill) Gieger, and Margaret Tershowski, both of Douglas, GA; 1 Son: Liddell (Elisa) Veal of Douglas, GA; 1 Sister: Elizabeth Porter of Douglas, GA; 11 Grandchildren, and Numerous Great Grandchildren. Several Nieces, Nephews, Friends, and Other Relatives. Memorial Services were held Saturday, December 26, 2015, at 2:00 P. M., at the Chapel of Ricketson Funeral Home, with Rev. Rob Merritt officiating, Several Eulogies were given by members of the family and friends in the Congregation. The Inurnment will follow in the Douglas City Cemetery at a later date. Special Musical Selections, “He Whispered Sweet Peace To Me”, was presented by the Chatterton Holiness Baptist Church Choir, led by Randall & Heather Merritt, with Ruth Jones, at the Piano, and “Amazing Grace”, was presented as a Congregational Hymn, led by Randall and Heather Merritt, with Ruth Jones, at the Piano. The family received friends Saturday, at the Chapel of Ricketson Funeral Home following the Memorial Services. Ricketson Funeral Home was in charge of the Arrangements.

The family of Pauline Gieger created this Life Tributes page to make it easy to share your memories.

Send flowers to the Gieger family.