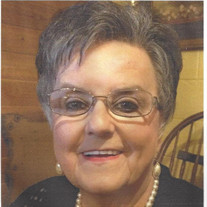 Mrs. Patricia “Patsy” Corbitt Wooten, age 68, of Broxton passed away early Wednesday morning, Dec. 9, 2015, at the St. Joseph’s-Chandler Hospital in Savannah, following an extended illness. She was born Oct. 6, 1947 to the late Elias “E. L.” Corbitt and the late Marie Harrell Corbitt. Mrs. Wooten, a native of Coffee County, was a Bookkeeper for Waylon Contracting. She was a 1965 graduate of Coffee High School. She was a devoted wife to her husband, and she was also a loving mother to her children. She was preceded in death by 1 Brother, Jesse G. Corbitt. Mrs. Wooten was a faithful member of the West Ward Street Church of God. Survivors include: Her Husband: Carl Wooten of Broxton, Ga.; 1 Daughter: Paulette Wooten of Nashville, Tennessee. 2 Sons: Rev. Patrick (Jodie) Wooten of Irving, Texas, and Shae Wooten of Charlotte, North Carolina. 2 Grandsons: Eli and Luke Wooten, both of Irving, Texas. 1 Sister: Winona (Gene) Daniel of Douglas, Ga.; Several Nieces, Nephews, Friends, and Other Relatives. Funeral Services were held Friday, Dec. 11, 2015, at 11:00 A. M., at the West Ward Street Church of God, with Rev. Britt Peavy and Rev. Dwayne Evors officiating. The Interment followed in the Bethany Cemetery. Active Pallbearers were: Timothy Wooten, Ronnie Brigmond, Charlie Mac Wooten, Caylon Brigmond, Christopher Brigmond, Tracey Corbitt, and Michael Corbitt. Special Musical Selections, “How Great Thou Art”, and “When We All Get To Heaven”, were presented as Congregational Hymns, led by Derek Soles, with Rev. Olin Greer, at the Piano. ‘Pre-Lude” and “Post-Lude” soft hymns were rendered by Rev. Olin Greer , at the Piano. Ricketson Funeral Home was in charge of the Arrangements.

The family of Patricia "Patsy" Wooten created this Life Tributes page to make it easy to share your memories.

Send flowers to the Wooten family.