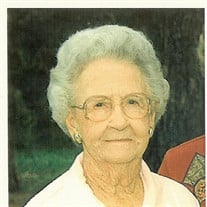 Mrs. Nola C. Newbern Fitzgerald, age 99, of Douglas, passed away peacefully Tuesday afternoon, October 14, 2014 at her beloved residence, following an extended illness. She was born October 20, 1914 to the late Jesse Newbern and the late Claud Beard Newbern. Mrs. Fitzgerald, a native and lifelong resident of Coffee County, was a retired school teacher having taught at both Upton and Broxton. She was a member of the Retired Teachers Association of Coffee County. She was a dispatcher during World War II for the 63rd Army/Air Force Flight Training Detachment for which she had remained active until her death. During her younger years, her passion was for farming and she was also known for her expertise in growing vegetables and raising livestock. She was preceded in death by her husband, Mr. Henry Perry Fitzgerald, 1 brother, Jesse Newbern, Jr. and 1 sister, Mrs. Annalee Kight. She enjoyed being an active member of the Broxton United Methodist Church, but she had spent most of her time communicating and entertaining friends that she had made during her almost 100 years of life. Survivors include: 1 Sister: Winnie White of Douglas, GA; 4 Nieces: Anna Rae Johnson of Douglas, GA; Jaunda (Ronnie) Ponsell of Griffin, GA; Joy Cook and Janice (Rodney) Downie all of Brunswick, GA; 3 Nephews: Kilbert (Eva) Milhollin of Marietta, GA, Kyle (Connie) Milhollin of Douglas, GA, Jesse (Cathy) Newbern III of Roanoke, VA; Several Great Nieces and Great Nephews, Friends and Other Relatives. Graveside Services were held Thursday, October 16, 2014 at 1:00 P.M. at the Broxton City Cemetery with Rev. Elick Bullington and Rev. Beverly King officiating. A Fly Over was presented by the 63rd Army/Air Force Flight Training Detachment. A special thanks to all of Mrs. Fitzgerald's caregivers for their kindness during her illness. The Group includes Annette Johnson, Tony Wynn, JoAnne Wright, Stacie Milhollin, Cheryl Reynolds, Jean Smith, Bernice Roberts, Keely Rothacher, Kate Curtic and Nancy Thompson. In lieu of Flowers, the family has requested that donations be made to the Broxton United Methodist Church Ricketson Funeral Home was in charge of the arrangements.

The family of Nola Fitzgerald created this Life Tributes page to make it easy to share your memories.

Send flowers to the Fitzgerald family.