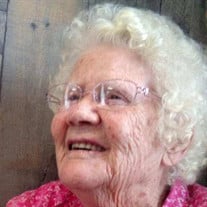 Mrs. Maureen Peterson Solomon, age 87, of Tifton, GA, formerly of Broxton, passed away early Saturday morning, September 2, 2017 at her residence following an extended illness. She was born in Telfair County June 1, 1930 to the late Lola Mae Briley. After the death of her mother, she was adopted by the late Alfred and Lillie Peterson who raised her. In addition to her parents, she was preceded in death by her husband, Wilbert Solomon, Sr., 1 Granddaughter, Cindy Bounds and 3 Brothers; R. T. Peterson, Albert Peterson and Durwood Peterson. Mrs. Solomon was retired from Douglas Foods where she worked on the assembly line in the meat processing department. In her spare time, she was an avid gardener and she also loved to fish and cook. She enjoyed being with her family, her church family and friends. Mrs. Solomon was a member of the Broxton Church of God. Survivors include: 2 Daughters: Dayle Hollis and her husband, Wendell of Brandon, FL Betty Smith and her husband, Gary of Tifton, GA 5 Sons: Wilbert Solomon, Jr. and his wife Vivian and Mike Solomon and his wife Betty both of Douglas, GA Darryl Solomon of Broxton, GA Ronnie Solomon and his wife Janet and Randy Solomon both of Ambrose, GA 11 Grandchildren; 14 Great Grandchildren Several Nieces, Nephews, Cousins and a host of Friends The funeral service was held Sunday afternoon, September 3, 2017, at 3:00 P.M. at Broxton Church of God with Rev. Milton Pate and Rev. Joey Copeland officiating. A Special Poem, written by her son Ronnie Solomon, was read by her grandson, Greg Hollis. The interment followed in the Providence Cemetery near Broxton. Active Pallbearers were: Greg Hollis, Adam Solomon, Chad Solomon, Michael Harper, Wallace Newell and Michael Hardee. Honorary Pallbearers were: Tommy Greene, Austin Solomon, Betty Smith, Annie Hall, Sandra Pierce and Tippe Knight. Special Musical Selections “Come Morning” and “Mama’s Prayer” were presented by the Soloist and Pianist, Vermell Grantham, “Tell Me about the Good Ole Days” was presented by Sara Nan Hardee with Vermell Grantham at the Piano, “I’ll Fly Away” was presented as a Congregational Hymn with Vermell Grantham at the Piano. At the Graveside, “Go Rest High On That Mountain” was presented a cappella by the Soloist, Marlon Smith. Pre-lude and Post-lude soft hymns were rendered by the pianist, Vermell Grantham. Ricketson Funeral Home was in charge of the Arrangements.

The family of Maureen Peterson Solomon created this Life Tributes page to make it easy to share your memories.

Send flowers to the Solomon family.