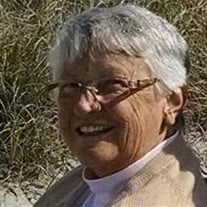 Mrs. Linda Gail Dempsey Hudson, age 70, of Broxton, Ga. passed away peacefully Monday, February 13, 2017 at Coffee Regional Medical Center following an extended illness. Mrs. Hudson was born April 29, 1946, and spent the majority of her early years in Norfolk, Va. Linda met her future husband, James Dallas Hudson (Jim), on a blind date initiated by her future father-in-law. At the time, Linda was working a civilian job at the Naval base in Norfolk, Va. where Jim and his father were stationed. Jim and Linda married in 1968 and settled in Georgia, Jim's home state. The couple moved to Coffee County in 1981 with their two sons. Linda lived to make those around her feel loved, and her greatest pleasure in life was to see others happy. She was adored by her family and friends for her kindness, generosity, compassion, humility, and constant desire to serve others. Despite her deteriorating physical condition over the years, Linda never complained and was always more concerned with the needs of those around her than her own. A member of the Broxton United Methodist Church, Linda relied heavily on her faith in God and led a life that exemplified a follower of Jesus Christ. She was comforted greatly during her last year by Psalm 46:10, "Be still, and know that I am God," which she also quoted frequently to others who were struggling. Linda's gentle, compassionate spirit was an inspiration in the lives of many people during her 70 years on Earth, and those who were fortunate enough to cross her path will greatly miss her presence. Mrs. Hudson is survived by her husband, Jim Hudson of Broxton; two sons, Jim Hudson, Jr. of Douglas and Jerry (Sandy) Hudson of Broxton; four grandchildren, Colin and Madison Hudson of Douglas, Katelyn Hudson-Parrent of Bakersfield, Ca., and Parker Scott Gaines of Broxton; her father, James Dempsey of Norfolk, Va.; one sister, Doris Bird of Waynesboro, Va.; one brother, Jimmy Dempsey of Chesapeake, Va.; several nieces, nephews, and cousins. Graveside services and interment for Mrs. Hudson will be held Thursday, February 16, 2017 at 11 a.m. at Central Missionary Baptist Church Cemetery. In lieu of flowers, the family requests donations to be made in her memory to Broxton United Methodist Church (105 Leggett St., Broxton, Ga. 31519) or the Wounded Warrior Project (4899 Belfort Rd., Suite 300, Jacksonville, Fl. 32256) Ricketson Funeral Home is in charge of the arrangements.

The family of Linda Gail Hudson created this Life Tributes page to make it easy to share your memories.

Send flowers to the Hudson family.