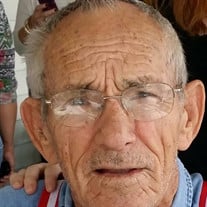 Mr. Leon Roger McClelland, age 78 of Douglas, passed away Monday afternoon, July 23, 2018, at The Landings of Douglas following an extended illness. Mr. McClelland was born August 29, 1939 to the late Leonard A. McClelland and the late Virginia Garbett McClelland. Other than his parents, he was preceded in death by his first wife, Mary Jo O’Steen McClelland and 1 Son, Anthony McClelland. Mr. McClelland, a native of Coffee County, was the owner of McClelland and Sons Dirt Hauling Business for many years. Mr. McClelland was a dedicated member of Rocky Pond Baptist Church. Survivors include, His wife, Peggy F. McClelland of Douglas GA 2 Sons: Steve McClelland and his wife Beth and Darryl McClelland both of Douglas, GA 1 Daughter: Gina Duss and her husband Greg of Tampa, FL 3 Step-Daughters: Becky McMillan and her husband Jesse and Bonny Lott both of Willacoochee, GA and Beth McClelland and her husband Steve of Douglas, GA 1 Brother: J. L. McClelland and his wife Louise of Douglas, GA 3 Sisters: Geraldine Johnson and her husband Rudolph of Hilliard, FL, Peggy Kibbey of Blairsville, GA and Brenda Tyler and her husband Dick of Douglas, GA 13 Grandchildren. A number of nieces, nephews, cousins and a host of friends The funeral service was held Thursday, July 26, 2018 at 4:00 P.M. at Rocky Pond Baptist Church with Rev. Lonnie Spikes, Rev. Bobby Fussell and Bro. Robbie Guthrie officiating. A Eulogy was given by Greg Duss. The interment followed in Rocky Pond Cemetery, with Bro. Robbie Guthrie conducting the Committal Service. In lieu of flowers the family requests donations be made to The Landings of Douglas Memory Care Unit at 1360 West Gordon Street, Douglas, GA 31533. Active Pallbearers were: Koby McClelland, Kip McClelland, Cole Browning, Braden Duss, Casey Davis and Jim Wilson. Honorary Pallbearers were members and staff of The Landings of Douglas. Special Musical Selections, “What A Friend We Have In Jesus”, “Because He Lives” were presented by the Soloist and Pianist, Waunell Nichols, “Beulah Land” was presented a cappella by Bobby Guthrie and “Jesus Is Coming Soon” was presented as a Congregational Hymn, with Waunell Nichols, at the Piano. At the Graveside, “Amazing Grace” was presented by Harry Smith on the Harmonica. “Pre-Lude” and “Post-Lude” soft hymns were rendered by the Pianist, Waunell Nichols. Ricketson Funeral Home was in charge of the Arrangements.

Mr. Leon Roger McClelland, age 78 of Douglas, passed away Monday afternoon, July 23, 2018, at The Landings of Douglas following an extended illness. Mr. McClelland was born August 29, 1939 to the late Leonard A. McClelland and the late Virginia... View Obituary & Service Information

The family of Leon Roger McClelland created this Life Tributes page to make it easy to share your memories.

Send flowers to the McClelland family.