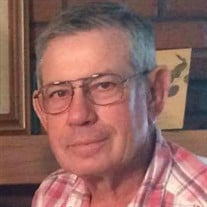 Mr. Lavawn Luke, age 73, of Nicholls passed away Wednesday morning, July 12, 2017, at the Hospice Satilla Hospice House in Waycross, following an extended illness. He was born May 2, 1944 to the late Shade Luke and the late Maggie Carter Luke.... View Obituary & Service Information

The family of Lavawn Luke created this Life Tributes page to make it easy to share your memories.

Send flowers to the Luke family.