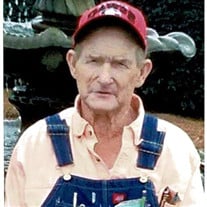 Mr. Lamar Davis, age 77 of Douglas, passed away Tuesday morning, November 28, 2017, at his residence following an extended illness. Mr. Davis, a native of Kirkland, GA, was born on October 9, 1940 to the late Jeff Davis and the late Willie... View Obituary & Service Information

The family of Lamar Davis created this Life Tributes page to make it easy to share your memories.