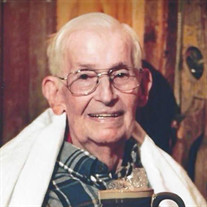 Mr. Joseph Hopson Minter, age 85, of Douglas passed away late Tuesday evening, October 22, 2019, at Vista Park Health & Rehabilitation, following an extended illness. Mr. Minter was born August 18, 1934 to the late John Thomas Minter and the late Urahbell Booth Minter. Other than his parents, he was preceded in death by 10 Siblings. Mr. Minter, a native of Wilkinson County, GA, was a self-employed Truck Driver for Mobile Homes. He attended Morningside Baptist Church. Survivors include: His Wife of 54 Years: Molly Herbert Minter of Douglas, GA. 2 Sons: Joey T. Minter and wife Kim of Ambrose, GA. Steven Stringer of Douglas, GA. 6 Grandchildren: Jenna Chinen of Kingsland, GA Ashton Chaney & Johnna Chaney, both of Douglas, GA, Joshua Stringer, Michael Stringer and Gabriela Stringer all of Douglas, GA 5 Great Grandchildren. Several Nieces, Nephews, Cousins and a host of Friends. The funeral service was held Friday, October 25, 2019, at 2:00 P. M., at the Chapel of Ricketson Funeral Home with Will Wisenbaker presenting the Eulogy. A special poem "In to God's Hands" was given by Will Wisenbaker. The Inurnment will follow at a later date. Condolences may be left for the family at www.ricketsonfuneralhome.com. Ricketson Funeral Home was in charge of the Arrangements.

The family of Joseph Hopson Minter created this Life Tributes page to make it easy to share your memories.

Send flowers to the Minter family.