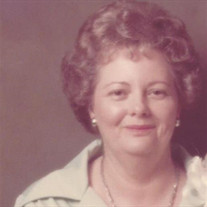 Mrs. Johnnie Gillis Lewis, age 85 of Douglas, passed away Friday afternoon, September 9, 2016, at Shady Acres Health and Rehabilitation, following an extended illness. Mrs. Lewis, a native of Coffee County, was born December 27, 1930 to the late Henry and Opal Vickers Gillis. She graduated from Satilla High School and Valdosta State College. Mrs. Lewis was a retired school teacher, having taught in the Coffee County School System for over 30 years. She was also a lifelong member of Carver Baptist Church. In addition to her parents, Mrs. Lewis was preceded in death by her husband, Edsel Lewis. Mrs. Lewis is survived by her children: Marcie (Eddie) Huss of Columbia, South Carolina; Elaine Lewis (Rodney Ragsdale) of Douglas, Georgia; Donnell (Don) Brooks of Douglas, Georgia; and Henry Edsel Lewis of Savannah, Georgia. She is also survived by her grandchildren: Jason Scott Lewis, Elton Brooks, Wesley Huss and Kelci Ragsdale. Services were held Monday, September 12, 2016 at 11:00 A. M. at Carver Baptist Church with Reverend Philip Corbean and Reverend Virlon Griner officiating. Mr. Wesley Huss presented an opening Prayer and Kelci Ragsdale presented the Lesson. Active Pallbearers were: Jason Scott Lewis, Elton Brooks, Wesley Huss, DeWayne Gillis, Don Gillis and Larry Lewis. Special Musical Selections, “Praise to the Lord, the Almighty” was rendered by the Congregation, led by David McDonald with Eddie Huss, at the Piano, and “Hymns to Joy” was rendered by the pianist Eddie Huss upon the family exiting the church. At the Graveside, “It Is Well” was presented a cappella by the Soloist, Eddie Huss. In lieu of flowers, memorials may be made to Carver Baptist Church Memorial Fund, 1080 Kamera Road, Douglas, GA 31535. The family would like to give special thanks to her kind and attentive caregivers. Ricketson Funeral Home was in charge of the arrangements.

The family of Johnnie Gillis Lewis created this Life Tributes page to make it easy to share your memories.

Send flowers to the Lewis family.