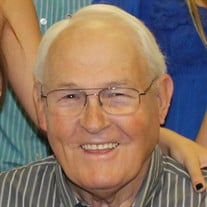 Mr. John Marshall “JM” Pridgen, age 83, of the Pridgen community, passed away Wednesday afternoon, August 12, 2020, at his residence following an extended illness. Mr. Pridgen was born December 15, 1936 to the late John Pridgen and the late Bessie Kight Pridgen. Mr. Pridgen was also preceded in death by his wife, Norma Jean Miller Pridgen. Mr. Pridgen was an ordained deacon and member of Pridgen Baptist Church. He farmed in the Pridgen community for more than 50 years and served as an agricultural inspector for the state of Georgia for 30 years. Prior to his career in agriculture, Mr. Pridgen served in the United States Army as a member of the military police. Mr. Pridgen is survived by his three sons, Marshall Pridgen and wife Cindy, Jeffrey Pridgen and wife Kathy, and Derek Pridgen and wife Janet, each of the Pridgen Community. Mr. Pridgen is also survived by eight grandchildren, John Pridgen, Walt Pridgen, Austin Pridgen, Chas Pridgen, Kensley Kerns and husband Micah, Emily Pridgen, Laura Ashlyn Pridgen and Stephen Pridgen, one sister, Martha Jean Meeks of West Green, numerous nieces and nephews and dear family friend Ricardo Castillo. The graveside Service and interment will be Friday, August 14, 2020 at 2:00 at Pridgen Cemetery with Bro. Stephen Hart officiating. A musical selection of “It is Well with My Soul” will be rendered by the soloist, Gayland Collins. Active Pallbearers for the service will be: John Pridgen, Austin Pridgen, Walt Pridgen, Chas Pridgen, Stephen Pridgen, Micah Kerns, John Harry Dockery and Tom Meeks. Honorary Pall bearers for the service will be Ms. Lola Threat and Ms. Loretta Ross. In lieu of flowers, the family has requested that memorial donations be made to Childhood Cancer Awareness Group of Coffee County, PO Box 1203, Douglas, GA 31534 Please note that due to restrictions of attendance and six foot social distancing being placed on funeral service attendees by the CDC and the State of Georgia concerning the containment of COVID-19, please observe their guidelines. Please wear your mask to the service. Ricketson Funeral Home is in charge of the arrangements.

The family of John Marshall "J. M." Pridgen created this Life Tributes page to make it easy to share your memories.

Send flowers to the Pridgen family.