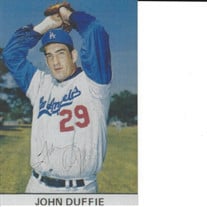 Mr. John Brown “Stretch” Duffie, age 72 of Douglas passed away suddenly at his residence on Thursday afternoon, April 19, 2018. Mr. Duffie, a native of Greenwood, SC, was born October 4, 1945 to the late Jack Theodore Duffie and the late Mary Elizabeth Brown Duffie Thornton. Mr. Duffie began his colorful sports career in baseball, football and basketball at Avondale High School in Atlanta, GA and then later at Brewton-Parker Junior College from which he graduated. He ultimately signed a bonus contract with the Los Angeles Dodgers as a pitcher where he played in that organization from 1966 to 1969. At that time he was the tallest player in professional baseball. After he moved to Douglas he worked with the City of Douglas in the maintenance department where he retired as the maintenance supervisor. He was also a member of St. Illa Baptist Church. Survivors include: His wife: Tonya Moore Duffie of Douglas, GA 1 Daughter: Brandy Michelle Novak of Coventry, Connecticut 2 Grandchildren: Katrina Novak of Coventry, Connecticut Brandon Novak and his wife Jackie of US Marine Corp, Washington, DC 1 Brother: James Duffie and his wife Mary of Atlanta, GA Step-Father: William J. Thornton of Rabun Gap, GA 3 Nephews: Ron Duffie and his wife Dawn of Auburn, AL Ken Duffie and Philip Duffie and his wife Heather both of Atlanta, GA 1 Niece: Marsi Beall of Dallas, TX 1 Sister-in-law: Cynthia Lyons and her husband Mike of Augusta, GA and their 2 children Angela McClure and her husband Jonathan of Atlanta, GA Pamela Freeman and her husband Jason of Cabot, Arkansas Several Nieces, Nephews, Cousins and a host of Friends The memorial service will be held Friday morning, April 27, 2018 at 11:00 AM at St. Illa Baptist Church with Rev. Walter James officiating In lieu of flowers, donations may be made to St. Illa Baptist Church 5638 Highway 158 West Douglas, GA 31535 or to ABLE FOUNDATION at www.purewaterww.org Ricketson Funeral Home is in charge of the arrangements.

The family of John Brown Duffie created this Life Tributes page to make it easy to share your memories.

Send flowers to the Duffie family.