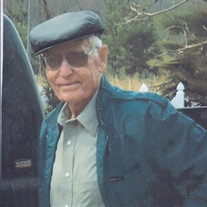 Mr. John Wesley Davis, age 96, of West Green passed away Wednesday evening, January 18, 2017, at the home of his son, Charlie Davis, in West Green, following a short illness. He was born November 7, 1920 to the late Lewis Charlton Davis and the late Sophronie C. Lewis Davis. Mr. Davis, a native of Coffee County, was a prominent farmer of the West Green Community. He enjoyed farming and raising animals. Other than his parents, he was also preceded in death by his Wife, Jimmie Lee Fussell Davis, 2 Daughters, Peggy Davis Sayer and Shirley Faye Davis Blair, and 14 Siblings. He was a U. S. Navy Veteran of World War II. Survivors include: His Children: Jimmy Bennett of Daytona Beach, Florida; Sammy Davis of Chattanooga, Tennessee; and Charlie Davis of West Green, Ga. 17 Grandchildren, and 7 Great Grandchildren. Several Nieces, Nephews, Other Relatives and Friends. Funeral Services were held Monday morning, January 23, 2017, at 11:00 A.M. at West Ward Street Church of God, with Rev. Leroy Spivey and Rev. Britt Peavy officiating. The Interment followed in the Douglas City Cemetery with Presentation of the U. S. Flag and the Bugler playing “Taps”. In lieu of flowers, the family request donations be made to Julie Davis, wife of Josh Davis of Chattanooga, TN. Josh is the son of Sammy and Diane Davis and the grandson of the late John Wesley and Jimmie Lee Fussell Davis. Josh is critically ill with cancer. Donations can be left at Ricketson Funeral Home or West Ward Street Church of God. Any donations that are received will be forwarded to the family. Active Pallbearers were: Charlie Davis, Sammy Davis, Jimmy Bennett, Bobby Davis, Wesley Davis and Zack Hagains. A Special Musical Selection, “Amazing Grace”, was presented by the Soloist, Jon Baker, with Robyn Vickers, at the Piano. “Pre-Lude” and “Post-Lude” soft hymns were rendered by the Pianist, Robyn Vickers. Condolences may be left at www.ricketsonfuneralhome.com. Ricketson Funeral Home was in charge of the Arrangements.

Mr. John Wesley Davis, age 96, of West Green passed away Wednesday evening, January 18, 2017, at the home of his son, Charlie Davis, in West Green, following a short illness. He was born November 7, 1920 to the late Lewis Charlton Davis and... View Obituary & Service Information

The family of John Wesley Davis created this Life Tributes page to make it easy to share your memories.