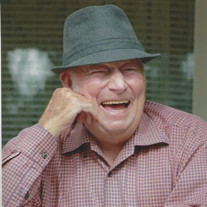 Mr. Joe Warren Soles, age 81, of Claxton, GA formerly of Douglas and Coffee County, passed away early Monday morning, November 2, 2015 at his residence in Claxton, GA with his loving wife and daughter-in-law by his side. He was born September 19, 1934 to the late William G. and Jessie Mae Todd Soles of Douglas, GA. Mr. Soles, a native of Nicholls and Coffee County, was a retired Natural Gas Dealer and Repairman. He had lived in the Claxton area for the past few years. He was also preceded in death by 2 Sisters, Jo Ann Waldron, and Vida Mae Musgrove, 3 Brothers, John Soles, Thurman Soles and Junior Soles. Mr. Soles attended the Claxton Church of God. Survivors include: His Wife of 61 years: Luzene Brigmond Soles of Claxton, GA; 1 Son: Tommy (Glenda) Soles of Douglas, GA; 4 Daughters: Brenda Soles and Angela Nettles, both of Claxton, GA, Tina Mintz of Jacksonville, FL and Lynn (Karl) Keene of Pembroke, GA; 1 Sister: Pearl Weatherington of Lakeland, FL; 19 Grandchildren, 34 Great Grand Children and 2 Great Great Grandchildren.; Several Nieces, Nephews, Friends and Other Relatives. The Lord said “go forth and multiply” and look what I did, (Quoted by him many times). He shared an undeniable love with his wife of 61 years. He was a wonderful father, a loving Papaw to all his grandchildren and he was more of a father figure to many of them and shared his life with them unselfishly. He entertained many with his great sense of humor. He preached many times of God’s Amazing Grace, enjoyed writing gospel music and sang even when no one was listening. His charismatic personality charmed many folks. He loved the outdoors and traveling. He had a testimony that he loved sharing with everyone. He was a bold witness for his Lord and Savior. Funeral Services were held Thursday, November 5, 2015 at 2:00 P. M. at the Chapel of Ricketson Funeral Home, with Rev. Toby Gale and Rev. Elaine Keene officiating. The Interment followed in the Salem Cemetery. Active Pallbearers were: Joe Reeder, Jesse Spurling, C. J. Singletary, Kevin Singletary, Christopher Harrell, and Scott Mintz. Honorary Pallbearers were: Tyler Stewart, T. J. Soles, Gauge Gilio, Nicholas Prescott, Joey Exley, David Taft, Austin Taft, Adam Claxton, and Michael Smith. Special Musical Selections, “Amazing Grace/My Chains are Gone”, and “Daddy’s Hands” were presented by the Soloist Kristi Taylor, with CD Music, “I Praise You”, was presented by CD Music, “Go Rest High on That Mountain was presented by the Soloist Elisa Singletary, with CD Music, “I Am Free”, and “I Hold A Clear Title To A Mansion”, were presented by taped music by the deceased, Joe W. Soles. “Pre-Lude” and “Post-Lude” soft hymns were rendered by CD Music. Ricketson Funeral Home was in charge of the arrangements.

Mr. Joe Warren Soles, age 81, of Claxton, GA formerly of Douglas and Coffee County, passed away early Monday morning, November 2, 2015 at his residence in Claxton, GA with his loving wife and daughter-in-law by his side. He was born September... View Obituary & Service Information

The family of Joe Warren Soles created this Life Tributes page to make it easy to share your memories.

Send flowers to the Soles family.