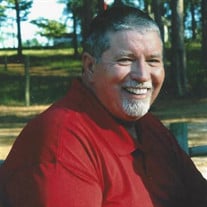 Mr. Jesse Darrell Stinson, age 64, of Douglas, GA passed away Thursday evening, September 28, 2017 at Coffee Regional Medical Center, following a short illness. Mr. Stinson was born in Orlando, FL on November 18, 1952 to the late Dewey Stinson and the late Mattie Weathersby Stinson. In addition to his parents, he was preceded in death by a sister, Darlene Stinson. Mr. Stinson was retired from Wal-Mart where he had been employed as a truck driver and was known as Hawk Eye. He enjoyed being with his children and grandchildren and he loved his church family very much. He was an avid hunter and fisherman. He also loved to play golf and go to the shooting range. For the past 27 years he had been an active member of Eastside Baptist Church, where he taught Sunday School and he also drove the Sunday School Bus. Survivors include: His Wife of 40 years: Deborah L. Hamm Stinson of Douglas, GA 3 Children: Kevin Stinson and his wife Niki of Royston, GA Rebecca Waldroup and her husband Randon of Nicholls, GA Chris Stinson of Ocoee, FL 1 Sister: Janice Floyd and her husband Berry of Ocoee, FL 1 Brother: Ron Stinson of Elba, AL 4 Grandchildren: Kara Stinson, Luke Stinson and Micah Stinson all of Royston, GA and C. J. Stinson of Ocoee, FL Several Nieces, Nephews, Cousins and a Host of Friends The funeral service was held on Sunday afternoon, October 1, 2017 at 4:00 P.M. at the Chapel of Ricketson Funeral Home with Rev. Jimmy Littlejohn and Dr. John Dobbins officiating. A Special Eulogy was given by his son, Kevin Stinson. The Interment followed at Douglas City Cemetery with Rev. Christian Colson conducting the Committal Service. Active Pallbearers were: Donnie Miller, Eddie Tanner, Bubba Hamm, Jerry Hamm, Caleb Floyd, John Graham, James Ward and Kenny Floyd. “Pre-Lude” and ”Post-Lude” soft hymns were rendered by the Pianist, Randy Braswell. Ricketson Funeral Home was in charge of the arrangements.

The family of Jesse Darrell Stinson created this Life Tributes page to make it easy to share your memories.

Send flowers to the Stinson family.