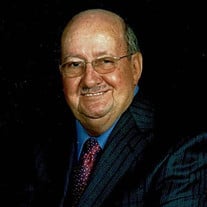 Mr. James Albert McKinnon, age 83, of Douglas, GA passed away on Sunday, April 28, 2019, at home surrounded by his family. Mr. McKinnon was born May 4, 1935, in Douglas. He was the oldest of three children of the late Jimmie McKinnon and the late Clyde Taylor McKinnon. Mr. McKinnon spent his business career beginning as Manager of B. C. Moore’s & Sons before opening Economy Auto Hardware Store, later known as OTASCO which served the community for several decades. Not one to retire for very long, he obtained his Real Estate Appraisal license and started McKinnon Appraisal Company, which still operates in Douglas today. He was a graduate of Douglas High School class of 1953. He was a veteran of the US Army serving in Germany during the Korean Conflict era and was an active member of First Baptist Church. Mr. McKinnon was a charter member of the Douglas Exchange Club. He was a loving father, husband, grandfather, brother, uncle and friend to many. He was married to Dorothy Lee Wilson McKinnon for 62 loving years. He was preceded in death by a grandson, Kyle Brantley. Survivors include his wife of 62 years: Dorothy Lee Wilson McKinnon of Douglas Survivors also include three children, son J Al Mckinnon and wife Pam of St. Simons, GA , daughters, Leigh Ann McKinnon of Douglas, GA and Lynee McKinnon Willison and husband Guye of Atlanta, GA. He was blessed with five grandchildren, Ashton McKinnon of Los Angeles, CA, Bryce McKinnon of Charlotte, NC, Blake McKinnon of St. Simons Island, GA, Nick Queen of Clemson, SC and Abby Queen of Atlanta, GA. a brother, Austin McKinnon of Jacksonville, FL and a sister Eloise Ely of Douglas and several nieces and nephews. The funeral service was held on Wednesday, May 1, 2019 at 3:00 P.M. at First Baptist Church with Dr. Shep Johnson and Rev. Don Hattaway officiating. Entombment followed in the Dixie Mausoleum at Douglas City Cemetery. Pallbearers were the grandchildren: Bryce and Blake McKinnon and Nick Queen with nephews Cam and Brian McKinnon and Greg Ely. Honorary Pallbearers were: Charles Warnock Sunday School Class, Jim Wilkerson, Tommy Sheppard, Walter Huckaby, Fred Binder, Lyle Gordon, Tom & Marsha Earnest, Bob Preston, Tom Preston, Ken Henry, Bob Moore, Charles Cross, Ronnie Anderson, Reggie Gilliard, Ray & Sandi Cason, Waldo Chaney, Norman Fletcher, Tullis Allen, Roger Allen, Tommy & Betty Bates and Louis & Ruby Harper. Special Musical Selections, “You Raise Me Up” and “Wind Beneath My Wings” were presented by the Soloist, Gayland Collins, with Marsha Gilliard at the Piano and an Instrumental of “It Is Well” was presented by the Pianist, Marsha Gilliard. “Pre-Lude” and “Post-Lude” soft hymns were rendered by the Pianist, Marsha Gilliard. The family expresses thanks to all for the support and prayers during this time of loss. Sympathy may be expressed by signing the online registry and leaving a memory at www.ricketsonfuneralhome.com or by making a donation in his name to Bethany Hospice for the care needs in the future. Ricketson Funeral Home was in charge of the arrangements.

Mr. James Albert McKinnon, age 83, of Douglas, GA passed away on Sunday, April 28, 2019, at home surrounded by his family. Mr. McKinnon was born May 4, 1935, in Douglas. He was the oldest of three children of the late Jimmie McKinnon and the... View Obituary & Service Information

The family of James Albert McKinnon created this Life Tributes page to make it easy to share your memories.

Send flowers to the McKinnon family.