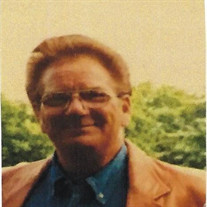 Mr. Glenn Wallace Wood, age 79 of Douglas, passed away Thursday evening, February 14, 2019 at Coffee Regional Medical Center following an extended illness. Mr. Wood was born September 3, 1939 to the late Leo Wood and the late Mary Wood. Mr. Wood was born at home in rural Broxton, GA. He grew up as a sharecroppers son; learning the meaning of hard work from an early age. Later he moved on to New Smyrna Beach, FL in search of a better opportunity. He got a job with a construction company and operated heavy equipment for many years. Later, Glenn went into the roofing business, working in Florida and Arkansas, where he had moved in 1985. After retiring from roofing, Glenn moved back to Douglas, GA to be near his many friends and family members, where he worked as a salesman at David's used cars. Glenn's favorite hobby by far was buying, selling ,and working on old cars and trucks. Survivors include: 2 Sons: Mike Welch and wife Linda of Arkansas Glenn Wood, Jr. and wife Cathy of Tennessee 4 Brothers: Pearly Wood and Douglas-Mac Wood both of Douglas, GA L. W. Wood of New Smyrna Beach, FL Junior Wood of Centre, AL 2 Grandchildren: Justin and Brooke Wood A number of nieces, nephews, cousins and a host of friends The funeral service will be Monday, February 18, 2019 at 11:00 A.M. at Chapel of Ricketson Funeral Home with Mike Welch and Glenn Wood, Jr. officiating. Entombment will follow at the Dixie Mausoleum at Douglas City Cemetery. The family will receive friends, Monday, February 18, 2019 from 10:00 A.M. until the funeral hour at Ricketson Funeral Home. Ricketson Funeral Home is in charge of the arrangements.

The family of Glenn Wallace Wood created this Life Tributes page to make it easy to share your memories.

Send flowers to the Wood family.