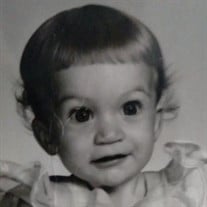 Mrs. Donna Sherrell Hersey Smith, age 61 of Nicholls, GA, passed away Friday morning, April 30, 2021 at Bacon County Hospital in Alma, GA following an extended illness. Mrs. Smith was born April 7, 1960 to Mildred Hersey and the late Bill Hersey. Other than her father, she was preceded in death by her husband, Randy Smith, a daughter, Rose Tarawneh and a brother, Tommy Hersey. Mrs. Smith was born in Ft. Knox, KY. She was a cosmetologist by trade. Survivors include: 1 Daughter: Brandy Douglas and husband Jason of Douglas, GA 1 Son: Jason Owens of Jacksonville, FL 5 Grandchildren: Ashlyn Douglas of Douglas, GA Patrick Owens and Andrew Owens both of Jacksonville, FL Ayah Rose Tarawneh and Gabe Tarawneh both of Oklahoma Her Mother: Mildred Hersey of Alma, GA 1 Brother: Terry Hersey of Alma, GA 1 Sister: J. C. Waters of Nicholls, GA Several Nieces, Nephews, Cousins and many Friends Memorialization is by cremation. The family will have a private family gathering that will be announced at a later time. The family requests that no flowers be sent. Contributions can be made to the funeral home to assist with funeral expenses or to the Wounded Warrior project in her honor. Ricketson Funeral Home is in charge of the arrangements. Jesus called a little child to him and put the child among them. Then he said, “I tell you the truth, unless you turn from your sins and become like little children, you will never get into the Kingdom of Heaven. So anyone who becomes as humble as this little child is the greatest in the Kingdom of Heaven. Matthew 18:2‭-‬4 NLT

The family of Donna Sherrell Hersey Smith created this Life Tributes page to make it easy to share your memories.