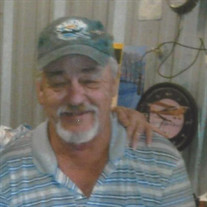 Mr. Colie H. Pitts, age 74, of Douglas passed away Friday afternoon, July 27, 2018, at his residence following an extended illness. He was born December 28, 1943 to the late Madison Thompson Pitts and the late Juanita Nettles Pitts. Mr. Pitts, a native of Coffee County, was a self employed carpenter doing home improvements. He was a veteran of the US Navy during the Vietnam era, where he served eight years in the Navy Submarine Service. He was also an avid deer and turkey hunter. Colie loved to fly his Aeronca Plane “Susie Q” whenever he got the chance. Survivors include: His Wife: Patricia Justine Pitts of Douglas, GA. 3 Children: Travis Pitts and his wife Genevieve of North Carolina Sandra Pitts and Jodi Moody and her husband Tim, all of Savannah, GA 1 Step-Son: Leo Fronczkiewicz of Douglas, GA 1 Sister: Sherrill Miller of Douglas, GA 4 Grandchildren: Spencer Grayson, Cooper Grayson and Reagan Grayson, all of Savannah, GA and Hector Pitts of North Carolina. A Number of Nieces, Nephews, Cousins and a host of Friends. The memorial service was held Wednesday, August 1, 2018, at 2:00 P. M., at the Chapel of Ricketson Funeral Home. An Opening Prayer was given by Sidney Meeks and Joe Cason read the Obituary. Eulogies were given by Archie Adams, Tommie Ann Coleman, Scott Gilbert and Joe Cason. A closing Prayer was given by Sidney Meeks. The Inurnment will follow at a later date. Special Musial Selections, “Old Rugged Cross” and “Amazing Grace” were presented as Congregational Hymns led by Sidney Meeks with Eileen Maxwell at the Piano. “Pre-Lude” and “Post-Lude” soft hymns were rendered by the Pianist, Eileen Maxwell. Ricketson Funeral Home was In charge of the arrangements

The family of Colie Hamilton Pitts created this Life Tributes page to make it easy to share your memories.

Send flowers to the Pitts family.