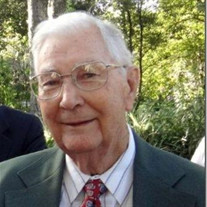 Mr. Buster P. Thomas, age 91, of Gainesville, Florida, passed away Friday evening, May 29, 2015, at his residence, following an extended illness. He was born August 26, 1923 to the late Wesley Henry Thomas and the late Mary Rigdon Thomas. Mr. Thomas, a native of Nicholls, Ga., had been living in the Gainesville, Florida area for many years. He was a Soil Scientist with the USDA Soil Conservation Service. He was a U. S. Veteran of the Army/Air Corps 24th Fighter Squadron during World War II, where he served as a 2nd Lieutenant in the Armored Cavalry Unit. He was a graduate of the University of Georgia, with a Bachelor of Science Degree in Agriculture. He was also preceded in death by his first wife, Jessie Frances Burnam Thomas, and a son, Bruce P. Thomas. Mr. Thomas was a member of the Grace United Methodist Church in Gainesville, Fla., and a former member of the First Christian Church of Ocala, Fla. Survivors include: His Wife: Nimet Turel of Gainesville, Fla.; 1 Daughter: Pattie (Clyde “Buddy”) Davis of Williston, Fla.; 2 Grandchildren: Jason Davis of Williston, Fl. and Jerry Davis of Gainesville, Fl.; 1 Step-Son: Bob (Gulbun) Alsan of Delray Beach, Fl.; Several Nieces, Nephews, Friends, and Other Relatives. Graveside Services and Interment were held Wednesday, June 3, 2015, at 11:00 A.M., at the Douglas City Cemetery, with Rev. Leroy Spivey officiating. Military Honors, (Flag Detail, Bugler,) were provided by Personnel from the 23rd Wing Honor Guard from Moody Air Force Base of Valdosta. Active Pallbearers were: Jason Davis, Jared Davis, Greg Metts, Buddy Davis, Raymond Burnam, and Jeff Anderson. Ricketson Funeral Home was in charge of the arrangements.

Mr. Buster P. Thomas, age 91, of Gainesville, Florida, passed away Friday evening, May 29, 2015, at his residence, following an extended illness. He was born August 26, 1923 to the late Wesley Henry Thomas and the late Mary Rigdon Thomas.... View Obituary & Service Information

The family of Buster P. Thomas created this Life Tributes page to make it easy to share your memories.

Send flowers to the Thomas family.