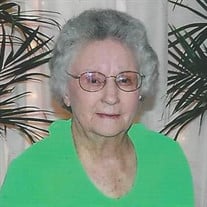 Mrs. Bertie Mae Miller Wooten, age 92, of Douglas, passed away Monday afternoon, July 3, 2017 at Shady Acres Health and Rehabilitation following an extended illness. Mrs. Wooten was born September 26, 1924 to the late Joseph Faley Miller and the late Nancy Prickett Miller. Other than her parents, she was preceded in death by her Husband, Joel Bryant “Joe” Wooten, 1 Daughter, Nancy Carole Wooten Auger, 1 Granddaughter, Carissa Fox Hamaty, 2 Sisters, Mary Lee Fletcher and Roxie Evans, 4 Brothers, J. L. Miller, Quincy Miller, Jesse Miller and J. B. Miller. Mrs. Wooten, a native of Coffee County, was a 1945 graduate of Broxton High School. During the war, she stayed out of school a year to help her father on the farm while two of her brothers went off to war. Determined to get her education, she returned to school the next year in order to graduate. While in school she was a fantastic basketball player. Mrs. Wooten was employed by Cable Industries until her retirement. She was a faithful member of West Ward Church of God where she had taught Sunday school for 42 plus years. She was known at West Ward to be a faithful prayer warrior. She also loved her children, grandchildren and great grandchildren and she enjoyed her church family. Survivors include: 1 Daughter: Elaine (Jim) Fox of Douglas, GA 3 Grandchildren: Jerry Auger and Casey of Douglas, GA ; Joel (Amelia) Auger of Broxton, GA and Don (Tammy) Hamaty of Atlanta, GA 7 Great Grandchildren: Hannah, Caroline and Matthew Hamaty all of Atlanta, GA Jerri and Carissa Hall Auger both of Douglas, GA Emma Grace and William “Will” Auger both of Broxton, GA A number of nieces, nephews, cousins and a host of friends. The funeral service was held Thursday, July 6, 2017 at 11:00 A.M. at West Ward Church of God with Rev. Britt Peavy and Rev. Leroy Spivey officiating. A Special Eulogy was given by Bonnie Holton. The interment followed in Douglas City Cemetery. Active Pallbearers were: Jerry Auger, Don Hamaty, J. W. Dockery, James Harrell, Matthew McDaniel and Justin McNeil. Special Musical Selections, “What A Day That Will Be” was presented by the Soloist, Derick Soles and the West Ward Church of God Choir, with Rev. Olin Greer, at the Keyboard, “It Is Well With My Soul” was presented by West Ward Church Choir, accompanied by Mrs. Wooten’s daughter, Elaine Fox, with Rev. Olin Greer at the Keyboard and “When We All Get To Heaven” were rendered by the West Ward Church of God Choir, with Rev. Olin Greer, at the Keyboard. “Pre-Lude” and “Post-Lude” soft hymns were rendered by Rev. Olin Greer, at the Keyboard. Condolences may be left at www.ricketsonfuneralhome.com. Ricketson Funeral Home was in charge of the arrangements.

The family of Mrs. Bertie Mae Wooten created this Life Tributes page to make it easy to share your memories.

Send flowers to the Wooten family.