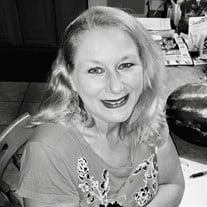 Ms. Angela Kay Joiner, age 53, of Douglas passed away Thursday, May 10, 2018, at Coffee Regional Medical Center following a brief illness. She was born June 25, 1964 to Herbert Joiner and the late Francis Adams Wood. Other than her mother,... View Obituary & Service Information

The family of Angela Kay Joiner created this Life Tributes page to make it easy to share your memories.

Send flowers to the Joiner family.