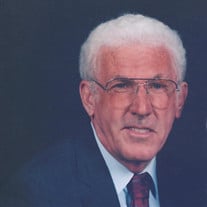 Mr. Alfred Eugene “Al” Hobby, age 82, of Broxton, GA passed away early Tuesday morning, December 13, 2016 at his residence following a brief illness. Mr. Hobby was born August 13, 1934 to the late Roy Lee Hobby and the late Willa Mae Cox Hobby. Mr. Hobby, a native of Tifton, Tift County, was a former employee of Berma Castrol of Jacksonville, Florida, where he was a District Sales Manager. He and his wife Frances had lived in the Broxton area for the past several years. He was a U. S. Army Veteran of the 101st Air Borne Division. Mr. Hobby was a Southern Baptist and member of the Providence Baptist Church. Survivors include His Wife, Frances Cato Hobby of Broxton, GA ; 1 Son, Douglas (Sherry) Hobby of Madison, FL; 4 Sisters, Dorothy Lankford and Leitha Bush both of Douglas, GA, Thelma Wooten of Broxton, GA and Jan Johnson of Hampton, GA; 3 Grandchildren: 14 Great Grandchildren; Several Nieces, Nephews, Friends and Other Relatives. Funeral Services were held Thursday, December 15, 2016 at 11:00 A. M. at the Chapel of Ricketson Funeral Home with Rev. Donnie Kirkland and Rev. George Carroll Paulk officiating. The interment followed in Reedy Branch Cemetery. Active Pallbearers were: Adam Cato, John Moore, Will Wooten, Tom Wooten, Justin Gay and David Atkinson. Special Musical Selections, “Look for me at the Feet of Jesus," was presented by the Soloist, Rusty Worth, with CD Music and “Sealed Till the Day of Redemption," was presented by the Soloist, Bobby Tanner, with CD Music. “Pre-Lude” and “Post-Lude” soft hymns were rendered by the Pianist, Denise Craft. Ricketson Funeral Home was in charge of the arrangements.

The family of Alfred Eugene Hobby created this Life Tributes page to make it easy to share your memories.

Send flowers to the Hobby family.